Today I had the itch to get out for a paddle and knew there was an iceberg spotted in Bay Bulls last week so I though I'd go out there to see if I could get close.

Heading out from the Outfitters launch. 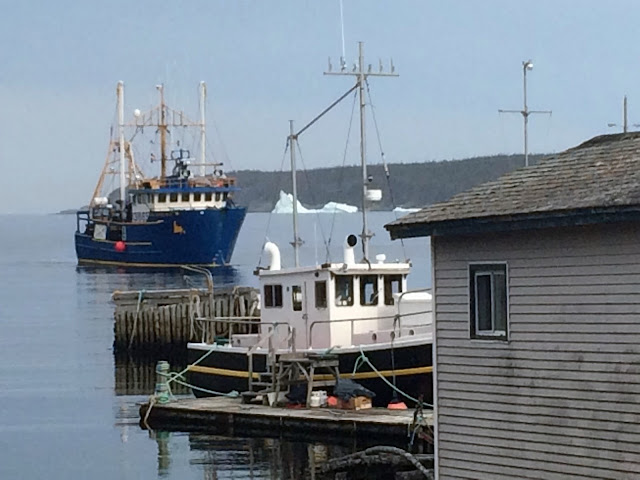 When I Paddled out so far, out came a drilling rig I couldn't see from shore.
I don't usually take pictures of this kind of stuff but mixed with the Iceberg it made for a pretty good shot. 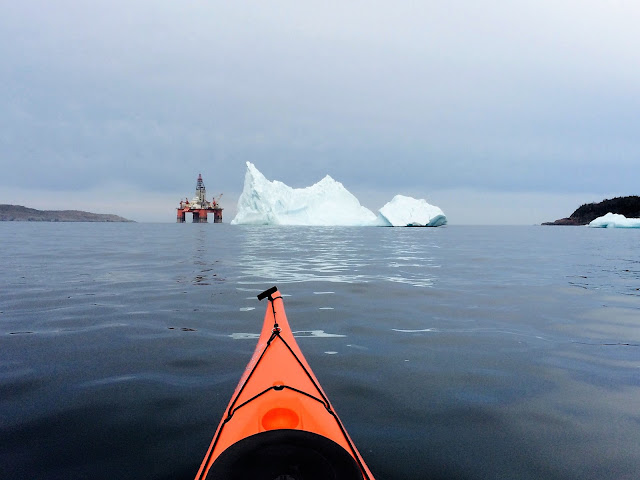 As I was paddling up the shore I got a few shots of some small caves. 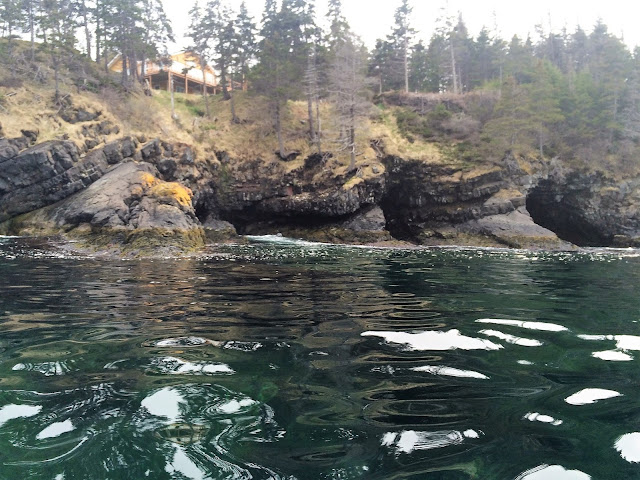 The whole way up the shore out of Bay Bulls looks like this with some decent size caves in the mix. 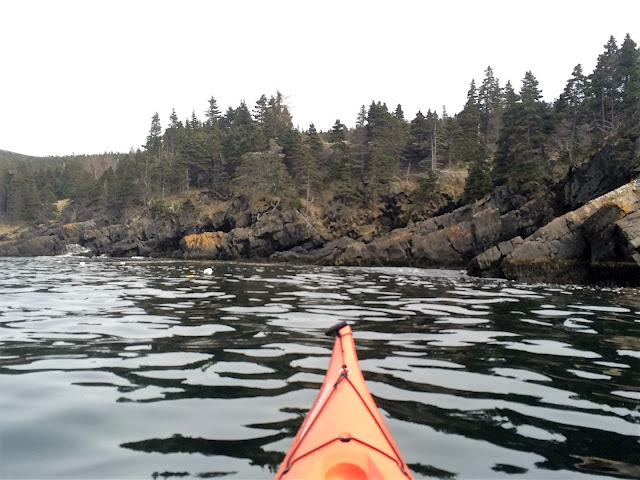 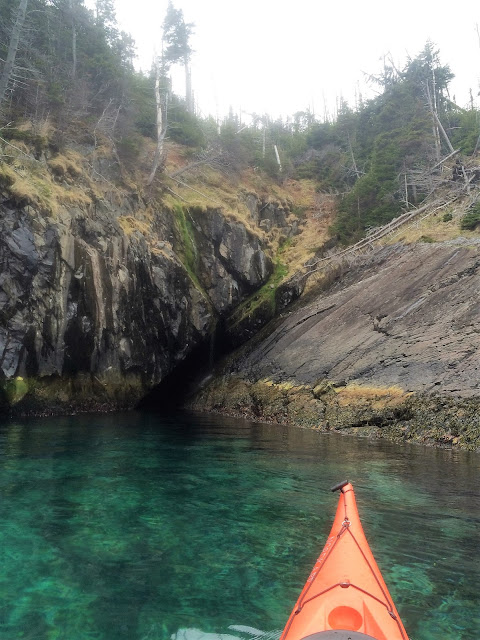 Thought this was a nice picture.  I'm using an IPhone to take these so not bad. 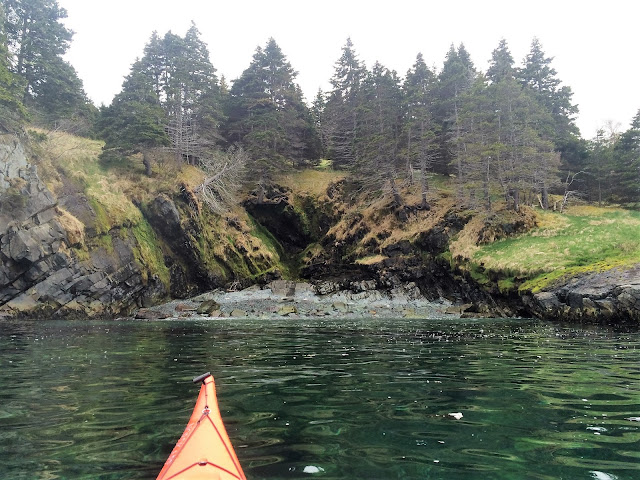 Getting more excited the closer I got to the Iceberg. 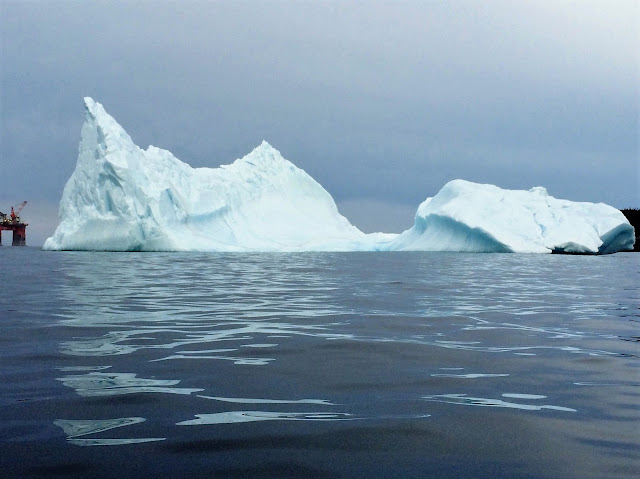 So I'm close enough now to have my heart pick up a few beats per minute making my way around. 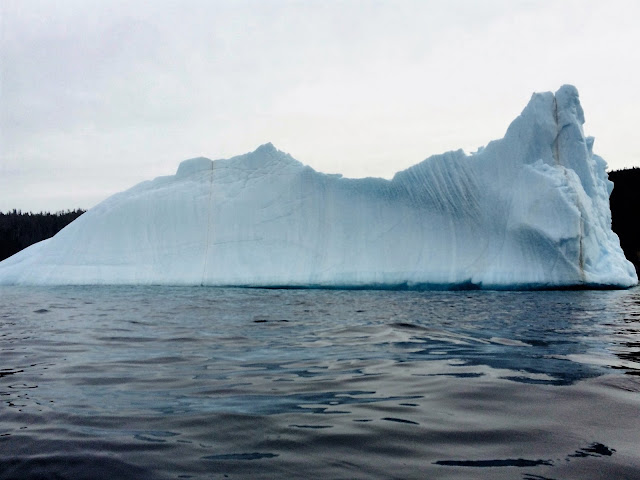 This one is probably my favorite pictures, or one of them anyways. 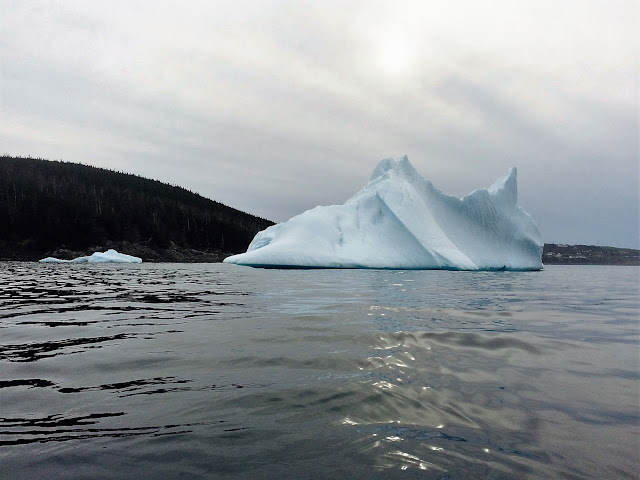 Worked my way a little closer for this one. 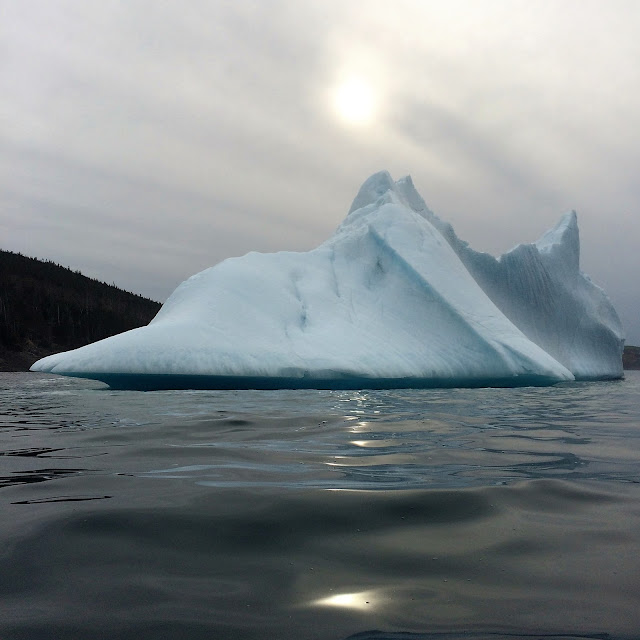 Hearing the swell crash into the Berg coupled with the cracking and splitting sound of the Iceberg was pretty intimidating when you out there alone in a kayak! 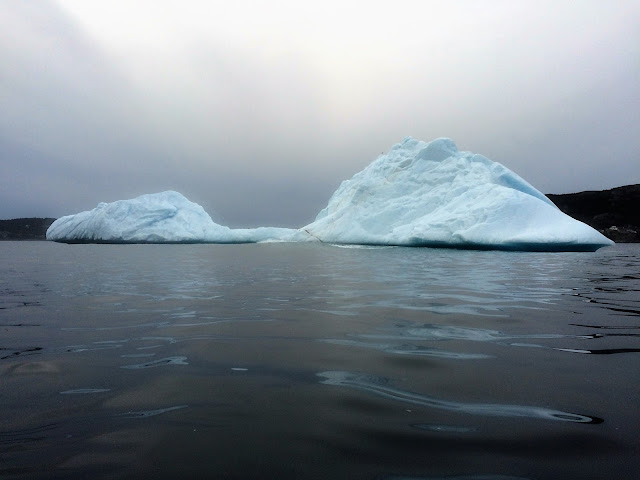 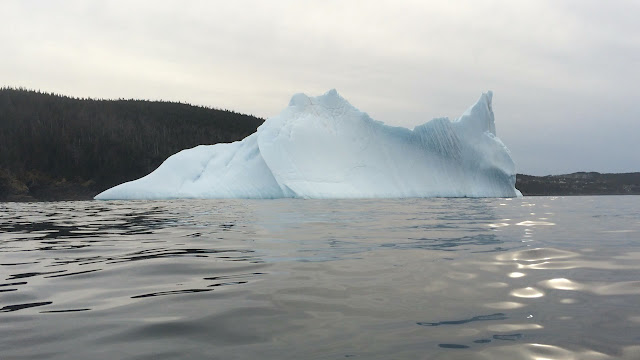 I just couldn't help myself... I had to paddle between these two Icebergs.  Between the sound of the Icebergs cracking and the noise made from the large rolling swell smashing into them... yep what a rush! :) 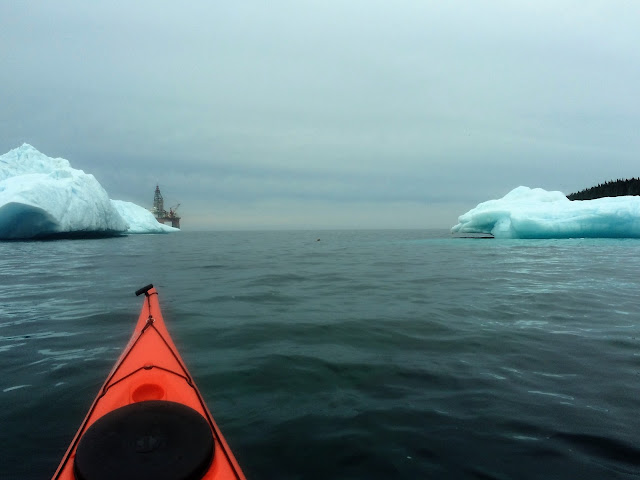 As I was paddling between the Icebergs I stayed a little closer to the smaller one and as I was passing by you could see that it was much larger under the water. 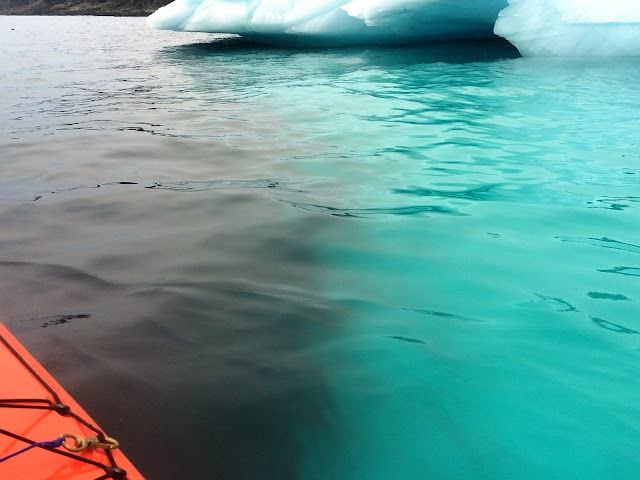 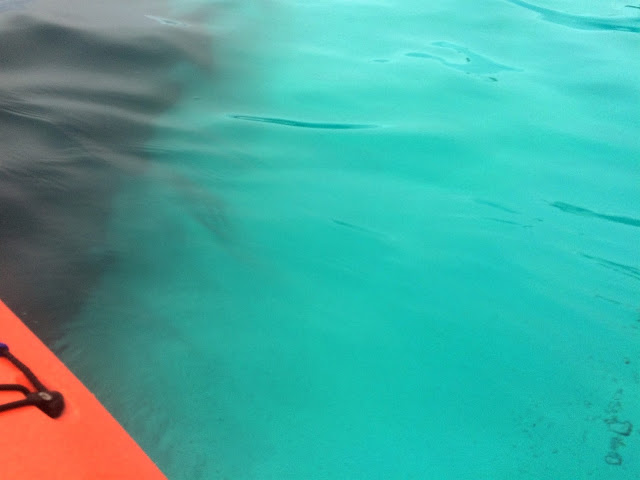 I got a few picture of the end of the big Iceberg as I was passing through.  I thought the color was awesome! 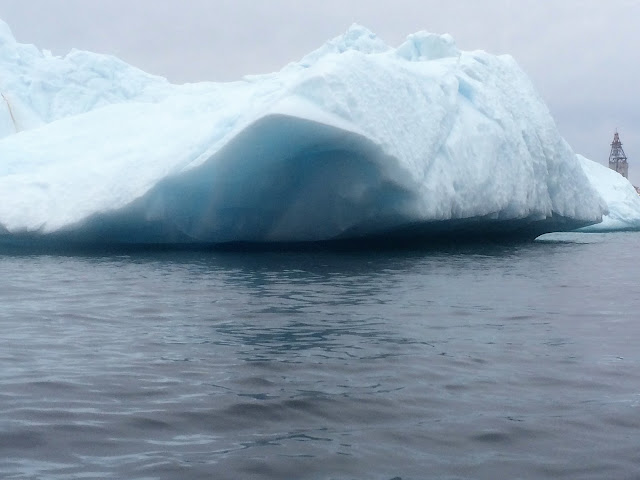 As I finished taking this picture and turned to put my camera away a hear a splash and being on high alert anyway my head quickly snaps to the left and all I see is the tail end of a seal disappear under the water about 6 feet from the side of my kayak.  I guess while I was watching the Bergs he was watching me...what a fright the little bugger gave me! lol
(I actually laughed out loud when this happened)

This is my Favorite!  Love this shot. 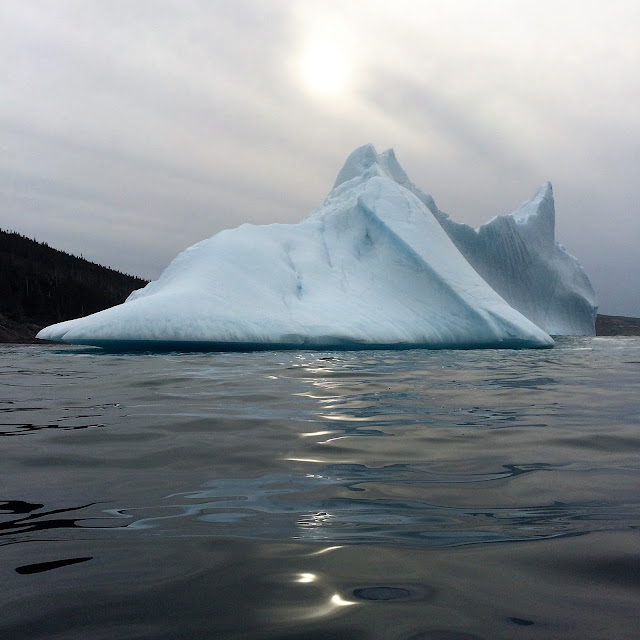 And no trip to explore an Iceberg would be complete without some Iceberg Ice in a glass of Rum. 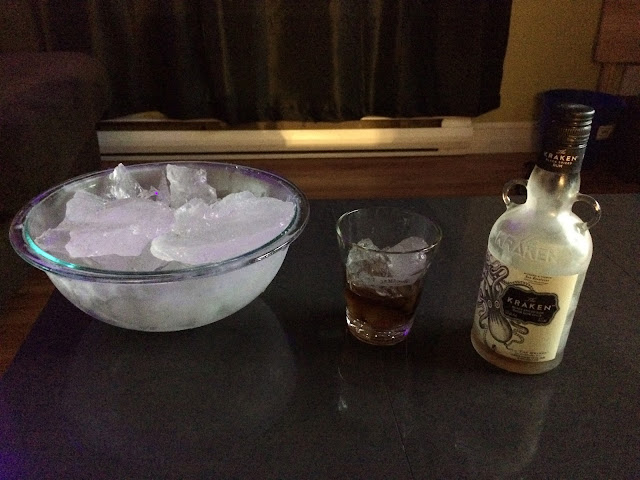 Well I can't think of any better way to spend a Monday evening...or any evening for that matter.
Adding them up this is my 3rd solo paddle.  Although it would have been great to share this experience with friends it was still an amazing day and a great step towards becoming a more confident paddler.  As I said earlier there were times when I realized how small I actually was out there compared to the Iceberg and the huge rolling swell.  There were also times when my BPM went through the roof lol but that's a big part of what makes this sport so much fun and so exciting.