Saturday night I sent out an e-mail saying I was heading to Ferryland in the morning to see the big Iceberg that has been sitting about 2 km off shore.  Brian was the only one interested in this adventure so we met in Bay Bulls and from there I rode with him.  Its a bit of a drive out to Ferryland, but well worth it!  This was my first time kayaking in Ferryland, and even without the iceberg its and excellent place to spend the day kayaking.

Shot from shore where we were trying to see if we could get out.  No luck so we headed down to Freshwater Cove. 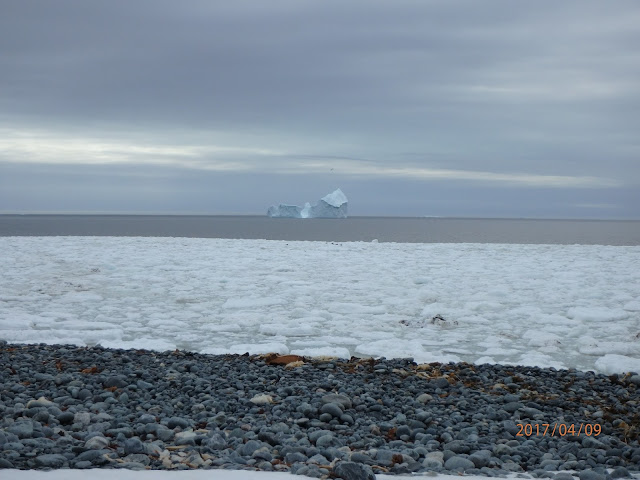 And the adventure begins! 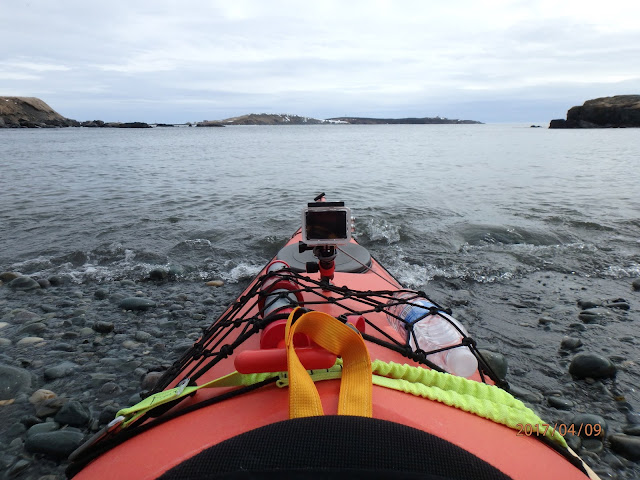 Here we are about 500m off shore heading towards Crow Island.
Our main reason for coming here today....in the background. 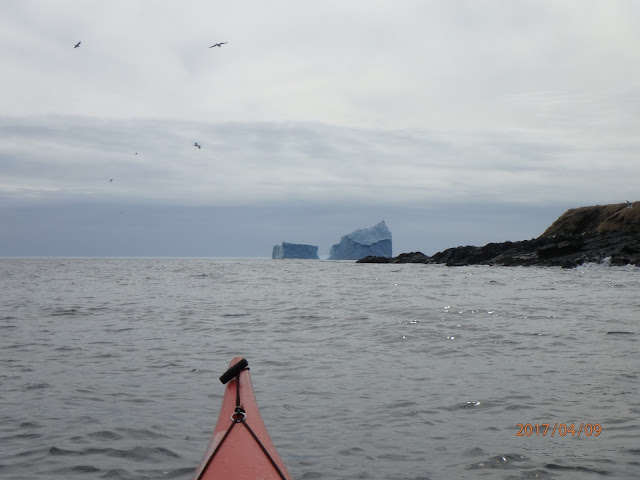 Larina did a presentation last Wednesday night about sea life and our interaction with them and a good part of her presentation was about birds...so I thought Id add at least one good picture! 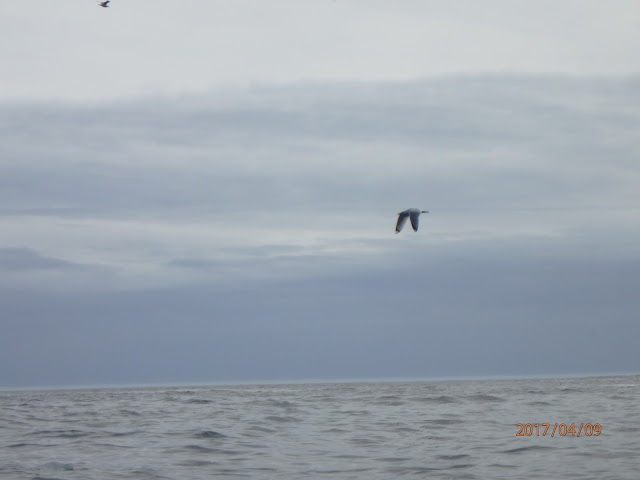 Even from a kilometre away this berg still looks massive! 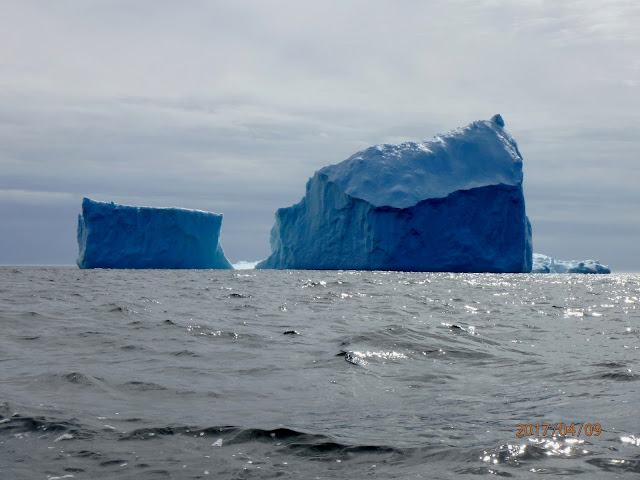 I got a few different shots as we made our way around.  Its cool to see as you make your way around something this big whats hiding on the other side. 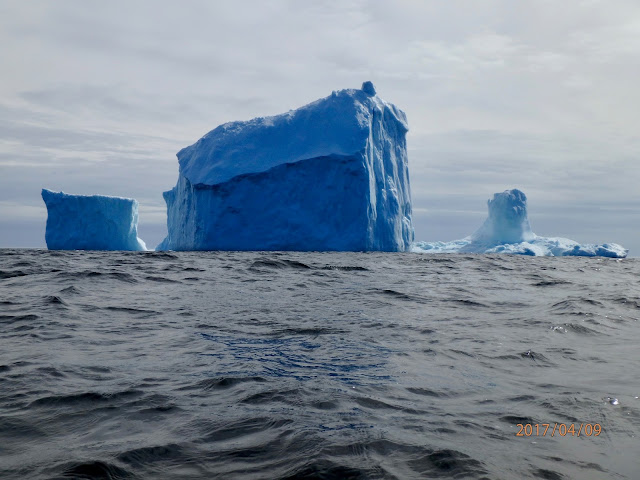 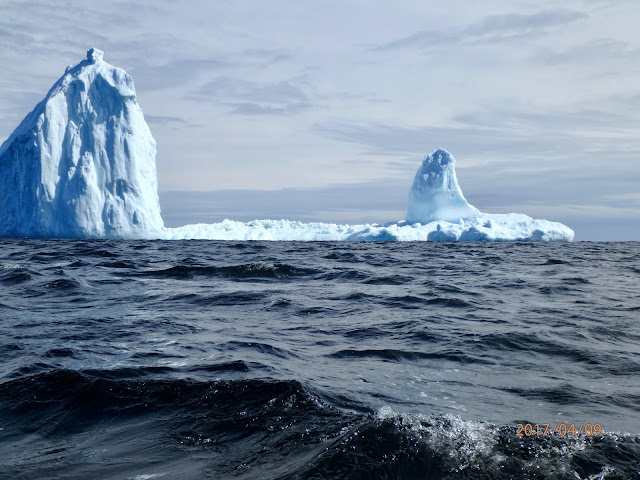 Great picture of Brian and the berg!  Look off to the far right and you can see the lighthouse on the point in Ferryland. 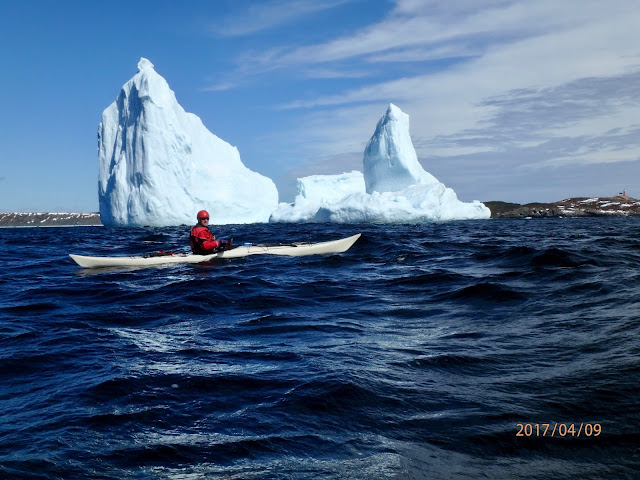 Few more shots of this beast! 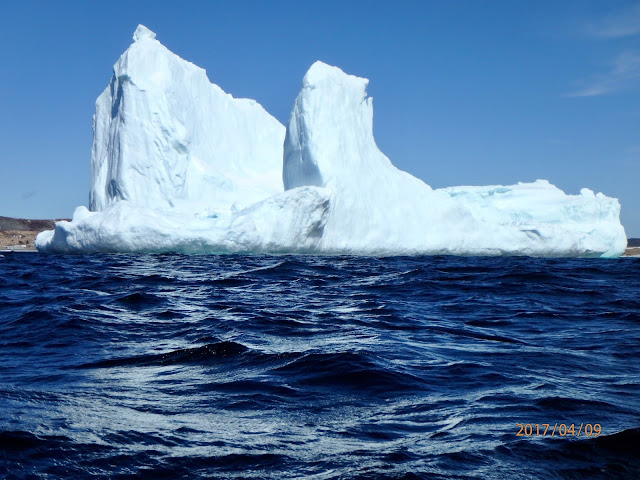 This is what I mean about seeing what hiding behind what you see from shore.
This is my favourite picture! 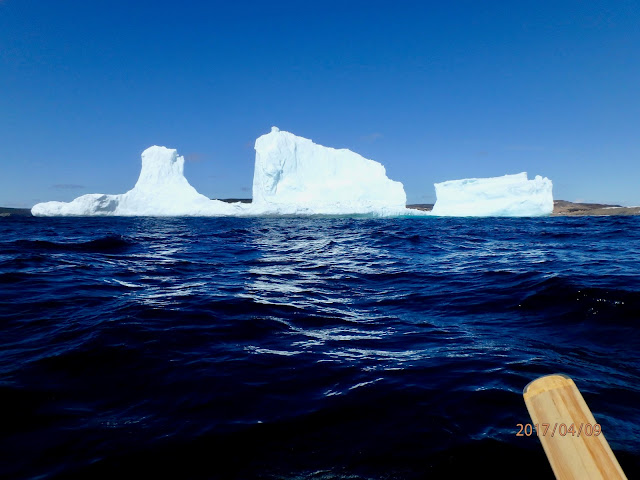 This is a perfect example of why you should keep a safe distance from icebergs.  There is a huge crack running down the end of this berg that Brian spotted, and it looks like its ready to break free at any moment.  A Chunk that size with a kayaker too close would certainly cause some damage! 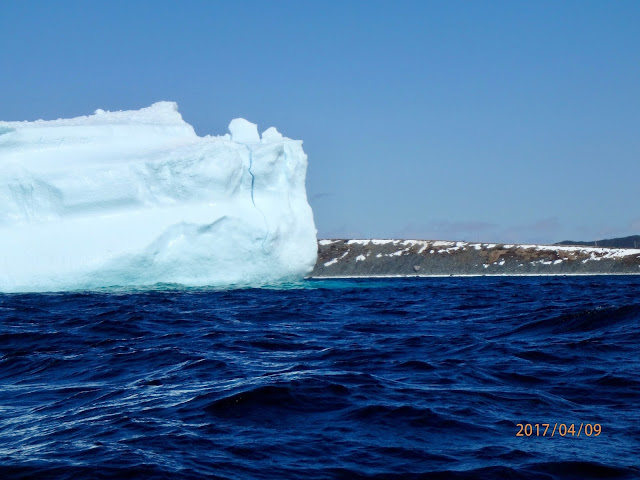 After we had our fill of the iceberg we decided to make our way around into Ferryland for our lunch.
This is one of my favourite pictures of the day! 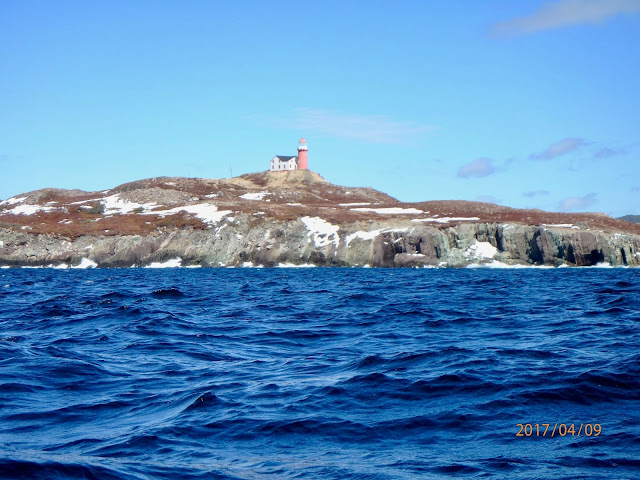 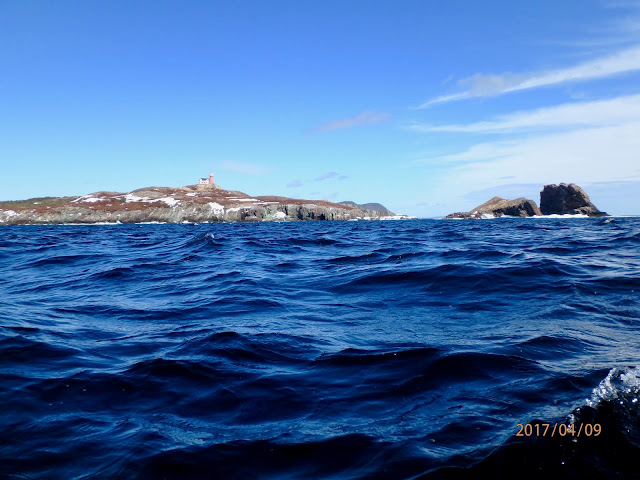 The wind had really picked up just as we left the iceberg to head to the Lighthouse.  Normally the guys will go through the passage called Hare's Ears, but as you can see it was a bit choppy for a space that tight. 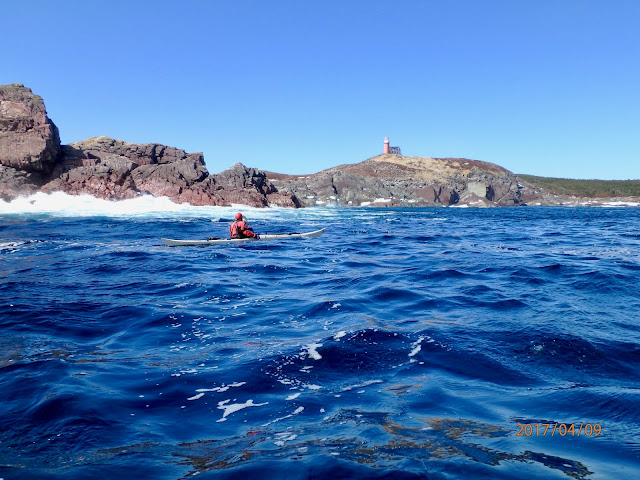 Great pic of Brian with the Ferryland Lighthouse in the back! 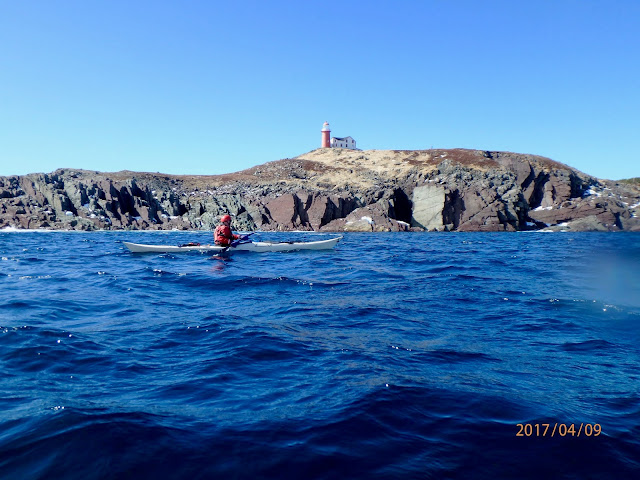 The Lighthouse is now a summer tourist attraction where you pick your meal of choice and a spot out on the hill and you have a picnic brought out to you.
I've done this once before and its a pretty cool thing to do if you want to try something different! 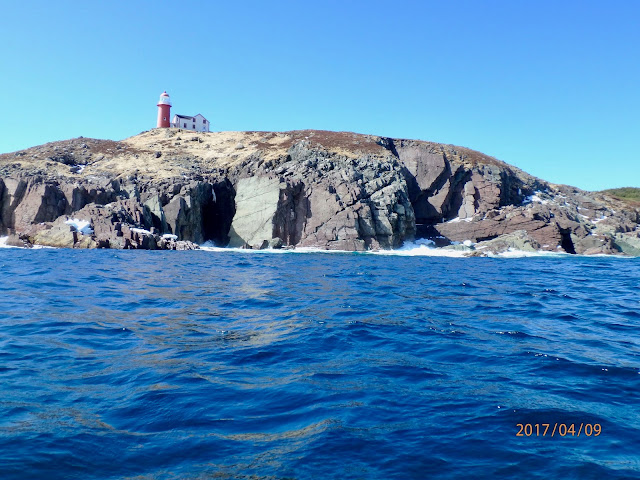 Once we got around the lighthouse and were heading into Ferryland where we were face into the wind and it was definitely not an easy task!
I didn't take any pictures of our way into Ferryland because I would loose too much ground in the time it would take me to get my camera out and take the picture.
Here we are just getting ready to pull in for a much needed rest and some lunch. 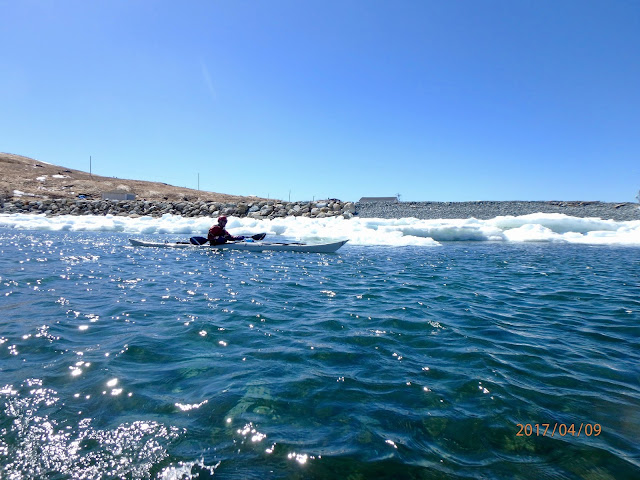 The last few weeks most of the bays in the area were filled with pack ice so we got close to the leftovers to take some good pictures. 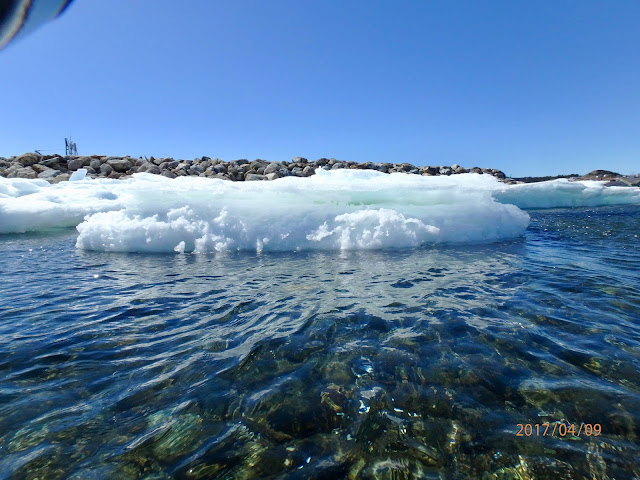 Lunch Time!  Just pulled up on the beach in Ferryland. 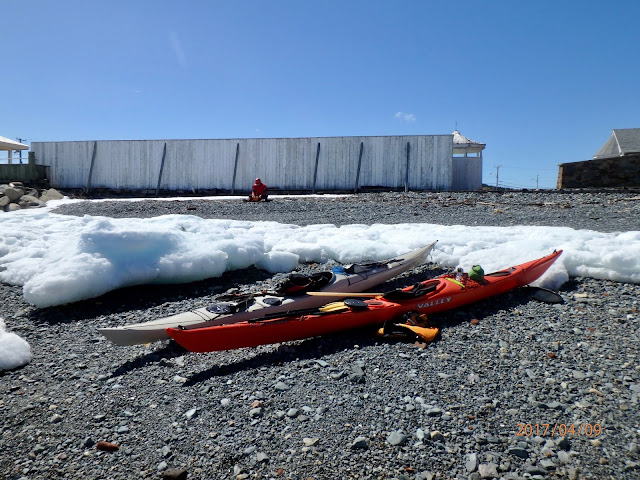 After lunch we could have made it easily back out around to the lighthouse, but coming back in the way we came out might have been too much of a challenge.  We decided to walk over to Freshwater Cove where the truck was parked and come back to get our kayaks.  It seemed a bit to early to call it quits so we headed back to our original launch point and went for round two!
This time our goal was to make it down to Aquafort to play in the river about half way in. 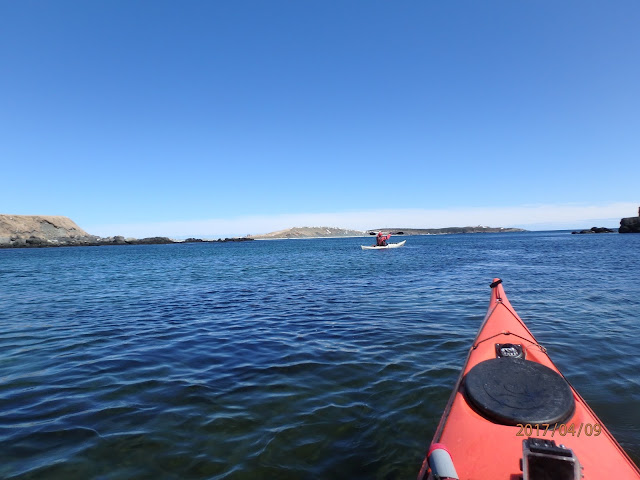 When we made our way out of Freshwater Cove to head down to Aquafort we were surprised to find the wind had gotten even stronger!
My guess is we were paddling into a very solid 40-45km/h wind.
We made it 100m from the Aquafort Harbour where we found a little cove we could catch our breath in, and as we were sitting there watching the wind blow the tops off of the waves we both agreed that we gave it a good effort but should probably head back. 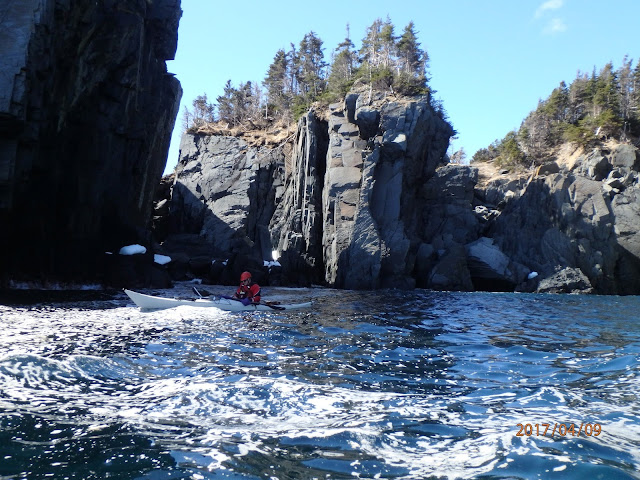 You can see the wind had some power behind it. 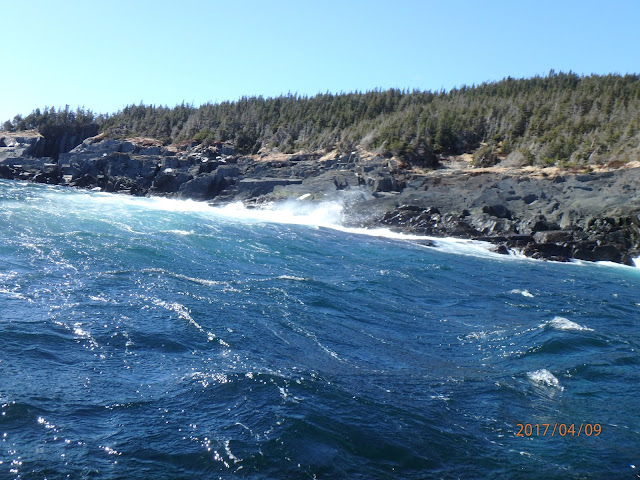 The ride back was a lot more fun than the ride down, catching a few good mini surf rides on the waves! 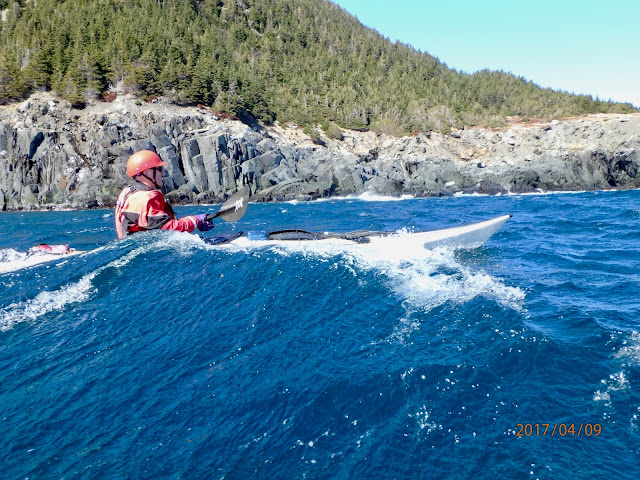 Brian enjoying the wind pushing him along 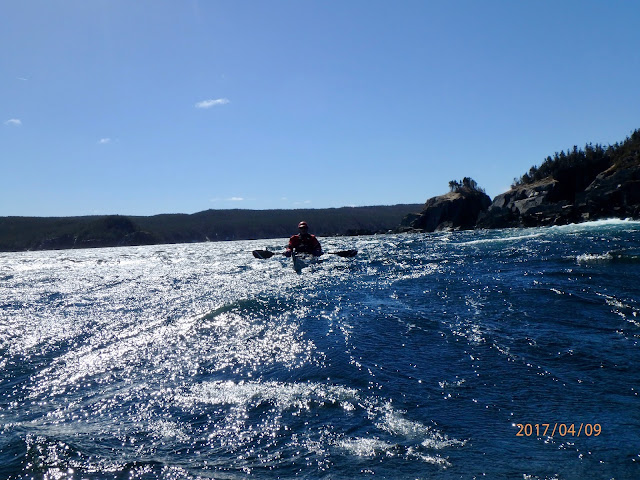 Last shot of the day with the King Berg in the background! 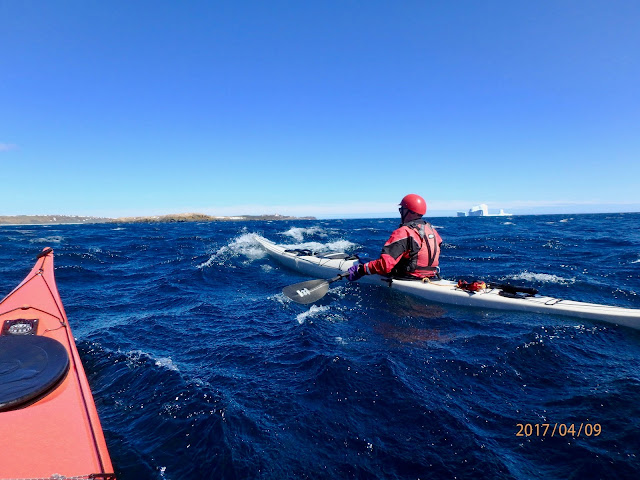 What an awesome day!  This winter hasn't been the best for being able to get out in our kayaks this year, but after today I think winter is calming down and we'll be back to our weekly trips!
Even tho the wind was more than expected it was still a lot of fun...even the hard legs of the trip into the wind!
Ferryland is definitely on my list of places to go back to this summer!
Thanks for the day Brian!  Always a good time buddy!
Posted by Unknown at 6:20 PM